British Unitarianism and the Lutheran Reformation 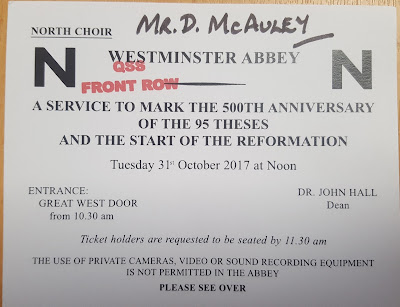 On 31 October 2017 I was honoured to be invited to attend a Service at Westminster Abbey to mark the 500th Anniversary of the 95 Theses and the Start of the Reformation. To experience Anglican and elements of Lutheran worship in the Abbey brought both joy and surprise and will live long in my memory.
It is not usual that Unitarians and Free Christians get invited to such ‘grand’ public events as ecumenical partners are drawn from Churches Together in Britain and Ireland from which the General Assembly has been excluded. I have however over recent years met regularly with the General Secretary of the Lutheran Council of Great Britain and other paid leaders of smaller faith groups and was pleased to be invited by him to attend.

I did have an allocated seat in the front row of the North Choir so had an excellent view of those leading the Service and sat immediately beside the truly excellent choir. Archbishop Welby preached. I was seated next to my good friend Paul Parker, Recording Clerk of British Quakers who wondered what George Fox would have thought of it all! He also caught me checking in on Facebook although I was not so crass as to actually use twitter during the Service. It was fun to join the tail end of the procession as we left.

The focus was on what increasingly unites the Churches. Part of the Service involved the Anglican Communion affirming its support for the Joint Declaration on the Doctrine of Justification which was signed by the Catholic Church and the Lutheran World Federation in 1997. In 2006 the World Methodist Council adopted the Declaration and the World Communion of Reformed Churches signed a statement of association in 2017. The significance is that there is a common understanding of justification by faith which was, of course, one of the dividing issues underpinning Luther and the Reformation.

Unitarians can rightly claim to have their roots in the Radical Reformation with a desire, as for example, the Hibbert Trust later stated, for ‘Christianity in its most simple and intelligible form’. Joseph Priestley saw the Church as being corrupted and for Reformation to continue. Lutheranism has had a minor influence of the development of Unitarianism. Rev Andrew Hill has written that the Transylvanian Unitarian leader David Francis had been a Lutheran Bishop and that Lutheran pietism influenced George de Benneville and early Universalism. German Unitarianism has its roots in break-away German free -thought congregations; however, the only seceding Lutheran congregations have been the Icelandic and Norwegian Unitarian churches of the North American prairies.

One effect of the Lutheran Reformation that remains a powerful influence is our focus on every individual as well as recognition of gifted leaders. H. John McLachlan wrote ‘For it [Unitarian tradition] has taken over from Protestantism Luther’s concept of the “priesthood of every believer” and it has sanctified the right of individual conscience and promoted a sense of moral obligation amongst its members which makes them, or should do so at least, good citizens of the community’ (TUHS, vol XV1 No 3 sept 1977, p128). This lies at the centre of Unitarian life today and is a legacy of the Reformation which merits recognition.

(Published with the permission of “Waymark” the newsletter of St Mark’s Unitarian Church, Edinburgh)