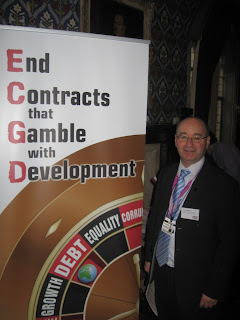 Did you know that taxpayers’ money can end up underwriting dodgy deals which can lead to human rights abuses, corruption, climate change and conflict?

Every year the Government backs millions of pounds worth of exports to developing countries, via a little known department; the Export Credits Guarantee Department (ECGD). ECGD has supported some of the most controversial British exports of recent years, including Hawk jets to Indonesia, which were used against the people of East Timor, and the Baku-Ceyhan oil pipeline in the Caucasus.

What is as shocking is that when these go wrong they become Third World debts.

I was pleased this week to give my support at the launch of the campaign to reform the ECGD at the Houses of Parliament being spearheaded by the Jubilee Debt Campaign.

The General Assembly has been a supporter of the Jubilee Debt Campaign since1998 in its aim to persuade the governments of the developed world to cancel debts owed to them by the poorest nations of the world.

What can you do?
- get involved in a local campaign group
- write to your MP
- take action
Posted by Derek McAuley at 16:01 1 comment:

The shocking murder of Gay activist David Kato has reinforced the need for action to protect lesbian, gay, bisexual and transgender (LGBT) people in Uganda. There has been a growing campaign of violence and prejudice. Ugandan citizens, including members of the Unitarian Universalist Church of Uganda, fear being killed.

In an e-mail to General Assembly Executive Committee member, Rev David Usher, the Rev Mark Kiyimba of Unitarian Universalist Association of Uganda said yesterday:“Greetings and thanks for the message! Sometime I even lose the little strength and energy I may have for other poor and marginalized people like LGBT when such killing of Kato happens, and most surprisingly the police have just released a report and indicating that Kato's murder has nothing to do with Hate Crime!You should understand following the failure by the Government to pass the Anti-Homosexuality Bill, the campaigners Pastor Martin Sempa and Others started a news paper publication called the Rolling Stone! This News Paper was calling for the Hanging of Gay people in Uganda especially those who they had outed and Kato was among them, He took the newspaper to court and he had just gained an injunction that stops [them] from publishing more pictures of gay people. Just weeks away and he is murdered!”
Mark and his colleagues need our support at this dangerous and critical time. We cannot allow them to struggle alone. Whilst there is action we can take politically, your money can make a difference.

Our friends in the United States. the Unitarian Universalist Association (UUA), in partnership with the UU United Nations Office (UU-UNO), have launched the UUA/UU-UNO LGBT Uganda Fund, to help LGBT human rights activists—including members of the Unitarian Universalist Church of Uganda—protect people whose safety is threatened and fight for social justice and LGBT rights.

I would urge you to give your support to this Fund.
For further information on the Unitarian Universalist Association of Uganda