Church Schools - a view on the Church of England Report

The Church of England published a significant report today on its role as a provider of education. Indeed the Church is responsible for more than 4800 schools and educates more than a million pupils.

The report asserts that Church schools stand at the centre of its mission.


In the accompanying news release the Bishop of Oxford, who is the national lead on education, indicates that he would not be surprised to see at least 200 more Church schools developed in the next five years.

Unitarians have always had major concerns about single faith schools funded by the taxpayer. In the early days of the General Assembly in 1929 the Assembly affirmed its support for a National System of Education, Free, Unsectarian and under Public Control. They opposed new facilities for sectarian teaching or ecclesiastical privilege and the imposition of any religious tests upon teachers in the employment of public bodies. In 1942 they welcomed better and more efficient teaching of religious knowledge by the use of agreed syllabuses and trained teachers provided. We should not forget that Church schools have special rights to discriminate in admissions and in the employment of staff.

More recently in 2001 the Assembly affirmed the value of education taking place in a multi-faith and non-sectarian environment and opposed any moves to support an increase in the number of schools with a religious foundation. Such moves were seen as socially divisive and impeded the growth of genuinely pluralist communities. It did not mean no faith in schools but a respect for all faiths and where pupils could be encouraged to explore issues of ethics and religious belief in an open and unbiased way. I would be concerned that the Church of England has a goal of expanding the number of schools when all the evidence points to a rapidly declining number of those claiming to be members of or associated with the Church of England.

The fact that Church schools, and a very small number of those of other faiths, exist and won’t be disappearing has encouraged Unitarians to support the AccordCoalition; a campaign group for inclusive education in faith and non-faith schools. Rabbi Jonathan Romain, their chair, has described this report as a missed opportunity. I would concur.

The report in particular wishes RE and collective worship to allow pupils to engage seriously with an develop an understanding of the person and teachings of Jesus Christ. This is a much too narrow view of religious education. It should be education about religion not about one religion. I would see a contradiction between "collective" and "worship" when a degree of compulsion is involved.

If you wish to explore one Unitarian view on school education there is a chapter by Dr Melanie Prideaux in “Unitarian Perspectives on Contemporary Social Issues” available free from Unitarian Headquarters.
Posted by Derek McAuley at 16:13 1 comment: 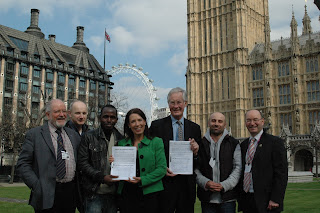 I was very pleased yesterday to give my support to the asylum campaign for Abdoulaye Diabete and Taha Ghasemi yesterday when they met Oldham MPs, Debbie Abrahams and Michael Meacher at Westminster. Their campaign has been supported by members of Oldham Unitarian Chapel led by their minister, Rev Bob Pounder.

The two MPs received petitions containing 2000 signatures to be presented to the Home Office. Both men are seeking leave to remain in the United Kingdom on compassionate grounds.

Abdoulaye Diabete also took the opportunity to present Debbie Abrahams MP with a copy of his fresh appeal prepared by the Manchester immigration solicitors, Latitude Law. The new legal appeal was completed on 16 March 2012 and contains expert witness evidence.

The campaign has received great support from the MPs, from supporters and members of Unitarian churches throughout the country. The legal work can only be funded by generous donations from individuals, churches and through fund-raising.

Quakers "Pushing at the Frontiers of Change"

Personal stories are often most influential inpushing forward social change. In this new book, “Pushing at the Frontiers ofChange: a memoir of Quaker Involvement with Homosexuality” David Blamirescharts that history. It starts with the publication of “Towards a Quaker Viewof Sex” in 1963 and the response it provoked, to the challenges in the lead-upto 2009 when Quakers in decided to seek a change in the law to see same-sex marriage as equal to opposite-sexmarriage. It was a joyful and profound moment in Quakers’ history, but one thattook decades to reach.


Throughout, legal issues and attitudes in society are describedalongside personal accounts and an exploration of Quakers’ wider input into theconversation about homosexuality. What emerges is a frank perspective on howsmall but committed groups of Quakers – their actions, meetings, publicationsand belief in equality – have contributed towards vast social change for gayrights in the .


On Tuesday 20th March 2012 at5.30pm at the Quaker Meeting House in in Manchester David will bereading from his book, talking about his personal journey and how the book hascome about. Ben Pink Dandelion, Professor of Quaker Studies, will also becontributing.


David has been a close friend of my partner’s parents since they met inthe Young Friends at university and it is a joy to see the publication of thisbook.


Unitarians responded promptly to the publication of “Towards a QuakerView of Sex” with the General Assembly in April 1963 approving the followingresolution, proposed by Martin West of the Unitarian Young people’s League,unanimously:


“That this Annual Meeting ofthe Ministers and Delegates of the General Assembly of Unitarian and FreeChristian Churches considering it essential for religious liberals to givetheir continuous attention to changing moral standards, commends to its membergroups and churches, for their sympathetic consideration, the recent Towards aQuaker View of Sex, published by the Home Service Committee of the Society ofFriends”.


The debate, as reported in “The Inquirer” (4 May 1963) “called forth an impressive volume of vocalsupport from all generations represented at the meeting" and saw a call forpressure on the Home Office to implement the Wolfenden proposals on reform ofthe law on homosexuality (which was not to be until 1967).


More generally, however, as reported by Rev Dr Ann Peart “Unitariansfollowed in a rather lukewarm fashion. Several resolutions to the annualmeetings concerning homosexuality and the age of consent failed to winapproval.” It was not until 1973 that more substantial work was initiated witha report produced for the 1974 annual meetings. This quoted and recommended thepamphlet “Homosexuality from the Inside”, edited by David Blamires. TheUnitarian report was, according to Rev Dr Peart, for its time “a brave attemptto advocate more just attitude to homosexuality.” It paved the way for theground-breaking 1977 resolutions that Unitarian ministry was open to all and expressingan abhorrence of discrimination on the basis of sexual orientation. It was in2008 that the annual meeting, with little public attention, approved theresolution seeking the right to perform civil partnerships in religiouspremises; infact one year before the Quaker decision on equal marriage.


David’s book is available from the Quaker Bookshop, or on Kindle.

Posted by Derek McAuley at 16:50 No comments:

and in Leyton,  as the winner of this year’s Inclusivity Award.

The Inclusivity Award, open to all schools in England and Wales, recognises and celebrates those schools that do most within the legal framework and community that they find themselves in to promote inclusiveness, the growth of mutual understanding and forge links within and between different communities.

Lammas School won strong praise from the expert panel of judges for its use of inclusive assemblies to forge shared values, the importance assigned to community cohesion, the popularity of its Religious Education, which was the school’s strongest subject at GCSE in 2011, its sensitivity towards the diverse backgrounds of it pupils, who speak over fifty languages and its ability to adapt to the changing cultural and religious profile of its student body

In second place is , a Christian faith school in Harpenden, Hertfordshire which earned high praise from the judges for its outstanding work in tackling homophobic bullying. The Independent had an article today which focused on the exceptional anti-homophobic bullying work of the second placed .

In third place is in . The College, which is in the top 4% of schools for Oftsed’s Value Added Score, was praised by the judges for its effort to challenge prejudice and the dangers of stereotypes, such as through focusing on conflict in Israeli and Palatine, and for its attempts to broad the horizons of its pupils through a range of external and extra curricula activities.

I was pleased to be invited to be one of the judges for the 2012 Award earlier this year. The others on the panel of judges were:

For more information on the Award and the Accord Coalition