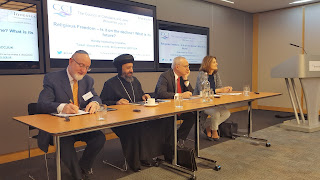 It was a pleasure, though an early start today, to attend a breakfast seminar arranged by the Council of Christians and Jews (CCJ) on "Religious Freedom - Is it on the decline? What is its future?"

Three speakers gave their personal perspectives to a large audience; His Excellency David Saperstein, (Ambassador-at-Large for International Religious Freedom for President Obama) Christina Odone (Director of Centre for Character and Values, Legatum Institute, ex-editor of the Catholic Herald) and His Grace Bishop Angaelos OBE (General Bishop of the Coptic Orthodox Church in the UK), Vice President of the CCJ and Vice President of the Jewish Leadership Council, Henry Grunwald kindly chaired the seminar. 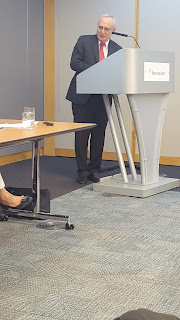 David Saperstein answered the question as "Yes" and "No" by quoting from Pew reports that 78% of the world's population suffer serious restrictions on religious freedom, which has slowly risen yet three quarters of all countries don't restrict freedom. He highlighted the important role of the Reports of the State Department in "naming and lifting up the plight of the oppressed" with a new report being published in two weeks. He ended by stressing the importance of of the interfaith community working together and that they can make a difference.

Christina Odone suggested that believers in Britain were "being harassed and held in contempt because of their faith". She saw a conflict between people of faith and those she saw as "liberals". This extreme conservative approach, smacked to me of the same intolerance against people of faith she spoke about.  We need to break down stereotypes and draw on the well-known words of Pastor Neimoller, as Bishop Angaelos actually did, about doing nothing when they came for those of other groups and having no one to protect us when they came for us.

During question time Ambassador Saperstein noted the challenges of civil rights in tension and reminded the audience of past discrimination against various groups with "no Catholics or blacks" signs. 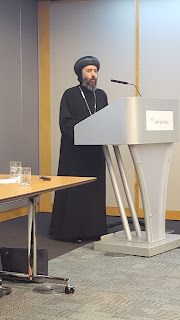 Bishop Angaelos is a fine example of what can be achieved by someone from a small community of faith committed to working together with others of like-mind but conscious of the demands of modern media, He said that the situation of religious minorities in the Middle East was complex and building up over the decades. He urged religious leaders not to be tribal and speak only for their "clan". In the question time he saw the need to be reactive and responsive to changes in society or religion would become irrelevant.

The meeting was hosted by Investec and thanks to them and CCJ trustee Zaki Cooper for organising the event.
Posted by Derek McAuley at 14:58 No comments:

What is a Unitarian? New video

"What is a Unitarian?" is a new video produced for the General Assembly which explores how British Unitarians see their faith today.

In the last six days it has been viewed 518 times so is clearly popular.

Thanks to Sarah West of West Creative.

Posted by Derek McAuley at 10:44 No comments:

There are many hidden treasures at Dr Williams's Library in London's Gordon Square but the most notable must be the wall paintings of Edward Armitage RA. The mural was painted in what was then the dining hall of University Hall (now the lecture hall of Dr Williams's Library) in memory of Henry Crabb Robinson. It was commissioned by his friends and completed by an advisory committee.

Edward Armitage RA was a prominent figure in the Victorian art world and a regular exhibitor at the Royal Academy.

It shows Crabb Robinson surrounded by his most distinguished literary and artistic friends. These include Wordsworth, Coleridge, Mary and Charles Lamb and Blake. Crabb Robinson had travelled in Germany and this accounts for the portraits of Goethe, Tieck, von Schiller and Herder. In total there were 47 portraits. At the end Armitage added a self-portrait with palette and brushes in hand.

The entire mural was covered over in the mid-1950s under whitewash and wallpaper and is known from engravings. It was fascinating to see some of Armitage's preparatory sketches and two of the engravings in the exhibition expertly curated by Jane Giscombe, a conservator at Dr Williams's Library. Tom Sawyer's evening lecture gave an insight into the murals and was, of course, delivered in the Hall in which we were acutely aware they remain "hidden" surrounding us! Descendants of both Armitage and Crabb Robinson were in the audience.

The exhibition at Dr Williams's Library can be viewed by appointment by telephoning 020 7387 3727.
Posted by Derek McAuley at 11:51 No comments: