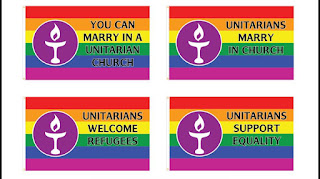 British Unitarian and Free Christians have used London Pride to promote same sex marriage in Church with the production of an inspiring and colourful video.

Unitarian congregations across the country from city centre churches to chapels in small towns have been registering their buildings for same sex marriage. In many counties and cities we are still often the only registered religious building where same sex marriages can be conducted. We did not marry anyone on the day of London Pride! Hopefully we highlighted that if a couple wished to have a religious or spiritual ceremony that this is now possible in a Unitarian Church

The video was filmed at London Pride when thirty-five Unitarians and Free Christians from across London and the South East celebrated Pride on Saturday 2 July 2016. The banners included "Unitarians marry in Church" and "You can marry in a Unitarian Church".

An initiative of the London District and South East Provincial Assembly of Unitarian and Free Christian Churches the film was produced by West Creative. The production of the film was supported financially by the General Assembly. Thanks to Ed Fordham for all his hard work to organise the group.

Posted by Derek McAuley at 11:18 No comments:

"The Light of the Spirit" - Chalice Meditation No 6.

It was a joy to share in worship at last week's conference of the International Association of Unitarians and Universalists (ICUU) at the Mennorode Centre, Nunspeek,The Netherlands,

"When I was inspired to begin this project, my aim was to produce a prayerful resource that could be useful to congregations, regardless of their size. These pieces are written to be sung repetitively and to be easy to pick up for choirs and congregations alike.

The meditations can be sung in unison or in parts, unaccompanied, or backed by piano or guitar."

We sang very movingly on several occasions at morning worship Meditation No 6. "The Light of the Spirit" by Rev Sarah Tinker

Sheet music, vocal guide and backing tracks are available - do go and listen.

Posted by Derek McAuley at 16:33 No comments: 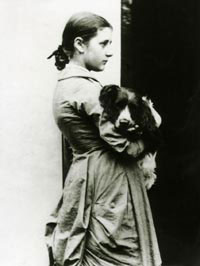 Tomorrow 28 July 2016 marks the 150th Anniversary of the birth of Beatrix Potter, the well known author, illustrator and conservationist.

She was brought up in a wealthy Unitarian family with a Manchester background. Rupert and Helen (Leech) Potter were active Unitarians and their close friends included Rev James Martineau, Unitarian theologian and philosopher, and Rev William Gaskell, husband of the novelist Elizabeth Gaskell. Their social life revolved around the Unitarian community surrounding Manchester.

Unitarians across the North West will be celebrating over this weekend:

Stalybridge Unitarian Church, where Beatrix Potter opened a bazaar in 1912, will be open on 28 July and 29 July from 1.30 to 4.30 pm with an exhibition. Refreshments will be available.

John and William Leech gave a plot of land on the edge of the Gorse Hall estate to build the church, which is situated on Forester Drive, Stalybridge. Donations from the Leech and Potter families enabled the church to open free of debt in 1870. The foundation stone was laid by Mrs Jane Leech, Beatrix Potter's grandmother.

Hyde Chapel Gee Cross will be open to visitors on 28 July, 29 July and 30 July from 1.00 to 4.00 pm with a display showing the Potter family connection with the Chapel. Helen and Rupert Potter were married here in 1863 and members of the Potter, Leech and Ashton families are buried here. Light refreshments will be available.

Dukinfield Old Chapel, where members of the Leech family are buried will be open on 29 July from 1.30 to 4.00 pm and 30 July from 11.30 to 4.00 pm. On 31 July there will be a service at 2.00 pm when Rev Dr Ann Peart, former Principal of Unitarian College Manchester, will talk on "Beatrix Potter's Manchester Connections". There will be an exhibition and "well dressing". Refreshments will be available.

Cross Street Chapel in Manchester's city centre, where her ancestors worshipped, will be open from Friday 29 to Sunday 31th July with a small exhibition.

Posted by Derek McAuley at 17:26 No comments: 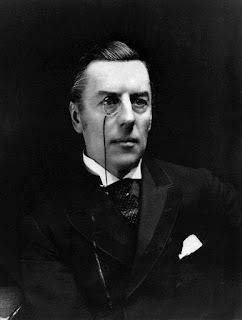 Joseph Chamberlain has been in the news this morning as an inspiration for the new Prime Minister, Theresa May. Labour MP Gisela Stuart has written in The Daily Telegraph "Meet Joe Chamberlain, the lost Tory leader whose ideas drive Theresa May." In today's Times we see one of May's key advisers Nick Timothy described as a "Chamberlain Conservative". He has written of the legacy of Chamberlain

Historian Alan Ruston in "On The Side of Liberty" boldly asserts "Joseph Chamberlain was a Unitarian born and bred, a fact of which he was openly proud...He was attuned to those aspects of the Unitarian faith that were commonly emphasised in the second half of the nineteenth century; the values of individualism, self-reliance, moral earnestness, and social action" (page 49).

He was a radical never a conservative and certainly not a Tory; although he left the Liberal Party over Irish Home Rule to become a Liberal Unionist.

Garvin has written "Chamberlain's inward life until he was nearly forty was directed by his religious upbringing..We may find here the germ of his assertive independence: of his anti-official or anti-orthodox initiative throughout his political career; or of his executive force as a leader of social reform" (quoted by Ruston page 51).

How Theresa May will measure up to his radical heritage and practical administrative skills time will tell?

He features in the Dictionary of Unitarian and Universalist Biography

Image with permission on the National Portrait Gallery
Posted by Derek McAuley at 17:59 No comments: