70th Anniversary of Unitarian attendance at National Service of Remembrance

2015 marks the 70th Anniversary of the first attendance of a representative  of the General Assembly of Unitarian and Free Christian Churches at the National Service  of Remembrace at the Cenotaph in Whitehall.

This is how "The Inquirer" (17 November 1945) reported on the invitation to Rev Mortimer Rowe, General Secretary with the comment that this was the first occasion when Unitarians  had been officially represented at the Ceremony. 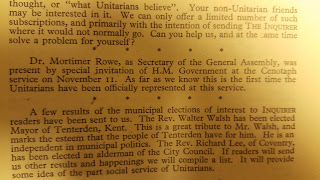 Posted by Derek McAuley at 09:16 No comments: