Swami Vivekanada and the World Parliament of Religions 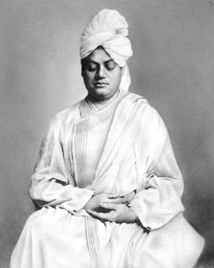 Reading this article on the BBC news about "Swami Vivekananda, the yoga missionary" I was intrigued by the reference to his participation in the World Parliament of Religions:

"He first shot to stardom at the World Parliament of Religions in Chicago. He called for tolerance and the end of religious fanaticism - by a strange coincidence the date was 11 September (or 9/11), 1893.

After his first words, "Sisters and brothers of America", there was a standing ovation - women fell over each other to get a closer look at this handsome Hindu monk with ochre robes and turban who spoke flawless English in a deep authoritative voice".

Unitarians and Universalists were heavily involved in arranging the first World Parliament of Religions. Rev Jenkin Lloyd Jones, born in the Welsh Unitarian stronghold of Llandysul in Ceredigion, was a Unitarian Minister in Chicago and acted as executive secretary and event organiser.

Vivekanada made the following plea:

"Much has been said of the common ground of religious unity. I am not going just now to venture my own theory. But if anyone here hopes that this unity will come from the triumph of any one of these religions and the destruction of the others, to him I say, "Brother, yours is an impossible hope". Do I wish that the Christian would become Hundu. God forbid. Do I wish that the Hindu or Buddhist would become Christians? God forbid".

The seed is put in the ground, and earth and air and water are placed around it. Does the seed become the earth, or the air, or the water? No. It becomes a plant; it develops after the law of its own growth, assimilates the air, the earth and the water, converts them into plant substances and grows a plant.

If the Parliament of Religions has shown anything to the world it is this: It has proved to the world that holiness, purity, and charity are not the exclusive possessions of any church in the world, and that every system has produced men and women of the most exalted character.
In the face of this evidence if anyone dreams of the exclusive survival of his own and the destruction of the otehrs, I pity him from the bottom of my heart, and point out to him that upon the banner of every religion would soon be written, in spite of their resistence: "Help, and Not Fight," "Assimilation and Not Destruction", "Harmony, Peace, and Not Dissension".(1)

That Unitarians and Universalists were instrumental in arranging the Parliament with such ideals of religious pluralism is striking. As Richard Hughes Seager has written " The Parliament was a harbinger of, a prelude to, perhaps the first exercise in what we now call globalization and multiculturalism".(2)

Posted by Derek McAuley at 12:27 No comments:

Being approached to submit a guest blog on someone else's site is something new for me. I  was therefore pleased to write a viewpoint for the ResPublica think tank website on marriage. I gave it the title "One Unitarian View of Marriage". I stress the word "One"; Unitarians will hold a myriad of views of marriage.

ResPublica have launched a strategic consultation on marriage:

I have also submitted written evidence to the consultation. Unitarians have been at the forefront of the debate on equal marriage; however, it is good to see the discussion widened to issues regarding societal structures.

ResPublica was founded by the theologian and political commentator Philip Blond in 2009 and is widely known for the concept of the "Big Society" and been influential with the Coalition Government. ResPublica was a runner-up in the Prospect Magazine 2012 UK Think Tank of the Year Awards.

The pamphlet "Love, Marriage and the Family - Changing Roles in society today", referred to in the blog, was published by the Department of Social Responsibility of the General Assembly following a conference at Manchester College, Oxford in 1973.

The three lectures published were:


Whilst, of course, very much of their era they were radical for the time for a religious body and still of some interest.

If anyone would like a copy please get in touch Dmcauley@unitarian.org.uk

Posted by Derek McAuley at 11:35 No comments:

I was intrigued last evening to attend a panel discussion with the title "What Can Faith and Finance Learn from Each Other" arranged by the Faiths Forum for London, Council of Christians and Jews and PwC, in whose stunning premises we met on the London's Riverside.

There was an impressive panel assembled;


The panel addressed not only what finance could learn from faith but also the converse, drawing upon their experience of the world of business.

I was struck by the statement made by PwC's premises; a new gleaming glass tower with a wonderful atrium. This was the wealth generated by the private sector in the midst of growing inequality in London. It was pleasing that the London Living Wage was highlighted when Kit Malthouse, Deputy Mayor for Business and Finance, replied to the panel. Corporate social responsibility is in vogue but must mean much more than being willing to host community and faith groups, valuable as this is.

Points which struck me:
In terms of what faith can learn from finance just think about capitalism's single minded focus on profit and then what faith groups are about? It was also emphasised that modern finance capitalism in Britain took two hundred years to develop; it was not done overnight, yet overturned perhaps thousands of years of religious teaching, for example against interest and usury. Faith's response needed to be similarly long-term and professional.

It was interesting that members of PcW's five faith networks attended and that the role of faith was recognised so explicitly in the workplace. Yet as one attendee emphasised the former role of workplace industrial chaplain has disappeared within the Churches.

To see photographs of the event

Posted by Derek McAuley at 14:44 No comments:

As we enter 2013 Unitarians will be marking the passage of the an Act of Parliament "to relieve persons who impugn the Doctrine of the Holy Trinity from certain penalties", known as the "Trinity Act", "Mr Smith's Act" (after its sponsor William Smith MP). It is hard to comprehend that as recently as 1813 to profess belief in Unitarianism was illegal in Great Britain.

January is a month to remember of sacrifice of Thomas Aikenhead, a young Edinburgh medical student, who allegedly railed against the Holy Trinity and was judicially hanged on 8 January 1679. His was the last execution for blasphemy in Britain. He was charged that for more than twelve months he had blasphemed against God, Jesus Christ, the Holy Scriptures, and all revealed religion. He was found guilty and two appeals were rejected by the Privy Council. The Church of Scotland General Assembly refused to intercede for him and called for his execution. This was carried out just outside Edinburgh.

In relation to Scotland,  the 1813 Statute repealed the two pieces of legislation, the first passed under Charles II and the second under William III, that ordained the punishment of Death for blasphemy under which he was convicted.

In 2012 we marked the deaths of Bartholomew Legate and Edward Wightman in 1662; the last to suffer death by burning for heresy in England. Thomas Aikenhead's death was controversial even at the time when ideas of religious freedom were spreading.

When we comment upon issues of religious freedom in other parts of the world we would do well to remember our own journey as a country and the effects of legal penalties suffered by Unitarians well into the 19th century.

For further information see the Dictionary of Unitarian and Universalist Biography.

Posted by Derek McAuley at 10:54 No comments: