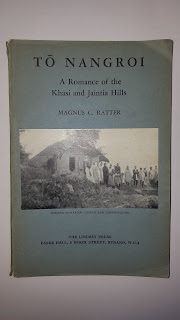 One of the books I picked up at the second hand bookstall at the General Assembly Annual Meetings was “TŌ Nangroi: A Romance of the Khasi and Jaintia Hills” by Rev Magnus C. Ratter and published by the Lindsey Press in 1932. I always look out for publications that I have not seen before. We have a recently established archive of the Lindsey Press at Essex Hall, initiated by Howard Hague, however I did not think it was there. When I checked I was right. It is also not on the catalogue of Dr Williams’s Library. So it must be a rare book indeed. It was certainly out of print by 1945 when two chapters were reprinted in “Khasi Calls: An Adventure in Friendship” also by the Lindsey Press. I have added my copy to the archive.

Its significance is that it tells the tale of the Khasi Unitarians in North East India when they had been in existence for less than fifty years.  In an address recently at Rosslyn Hill Chapel I spoke about international Unitarianism and included these Unitarians who live in the Khasi Hills in the states of Assam and Megalaya. I recalled that their Unitarian story really began with a Khasi man named Hajom Kissor Singh. He was born in 1865 at Cherrapunjee - "the wettest place on earth".

I said “As the missionary schools were considered best, he not only got his education there, but he was also converted to their faith. Even as a child he showed interest in religious matters and his reading soon led him to asking questions about some aspects of Christianity. The idea of the trinity bothered him. He was looking for a religion more like the religion Jesus taught so he left the Calvinist faith. He read a book by William Ellery Channing and got in touch with a Unitarian Minister in Calcutta. Unitarianism  was exactly what he was looking for. He was a Unitarian even before he knew the name. Hajom Kissor Singh spent the rest of his life walking over the hills establishing nearly 40 Unitarian congregations which are still there - many in very remote villages. British Unitarians then offered support. Much later in the 1930s Rev Margaret Barr went to the Khasi Hills and devoted her life to the community; but never as a missionary. She was an educator and community builder. The General Assembly India Fund continues to offer support as does the Unitarian Women’s League.”

Reading “TŌ Nangroi”, which means “Progress Onwards”, gives a real sense of the achievement of Hajom Kissor Singh. Rev Ratter spent eighteen months in India from 1930. Whilst a British delegation had visited in 1928 it had been many years since the previous visits. As one man elderly greeted him “Good gracious, I’ve not seen a white Unitarian these thirty years!”.  In one of the hill villages it had been 37 years since the visit of the American Unitarian, Dr Sunderland. The book gives a fascinating description of the life of the Khasis and of their religious practices.

Reflecting on the work of Hajom Kissor Singh I now realise the scale of what he did. We can glibly say that he was the founder of the Khasi Unitarians but this does not really convey the true nature of the man and his role. This Ratter captures well writing so soon after his death when his influence remained.

Looking more widely are their any lessons for us on church growth?. After all he went from zero members to 200 in ten years, continued to build and gain public recognition and leaves a legacy of a thriving Church today:

1. He was a remarkable man of “outstanding ability and keen spiritual perception” yet paid attention to his own development needs; for example, he studied theology under the postal guidance of Miss Emily Sharpe in 1893.
2. He sought outside  help and advice yet growth could only come from within. For most of the period described there was no resident external minister to lead or assist despite their pleas for help
3. He did not act alone; at the same time as he found Unitarianism another man, U. Heh Pohlong, the Khasi minister of an orthodox church at Nongtalang, was similarly exploring Unitarianism and had already formed a group. David Edwards, a trained worker, soon joined them and latter became the first ordained minister.
4. Conviction led to action but he started with one woman and two men in the original church in Jowai.
5. The generosity of external supporters in the US and then Britain supported their work.
6. The importance of women in leadership roles.
7. Caring for each other was as important as seeking new adherents.
8. Conflict and “quarrels” arise when “little-minded men” met “big issues.”
9. What was achieved was not without opposition, ridicule and disappointment – Ratter implies that his biggest may be the failure of Western Unitarians to send him a teacher - perhaps a rebuke to his British readers and a spur to action. His personal life was full of tragedy too.
10. His service-book was crucial to the preservation of the Unitarian Union; to Ratter it was a “unique and truly great achievement”. His writing was therefore of immense significance.

Some thoughts whilst you are washing the dishes! (as Rev Patrick O'Neill always said)

Posted by Derek McAuley at 18:03 No comments:

The All Party Parliamentary Group on International Freedom of Religion and Belief launched its latest report in Parliament on 7 June 2016 which I was pleased to attend. "Fleeing Persecution: Asylum Claims in the UK on Religious Freedom grounds" was jointly produced with the Asylum Advocacy Group.

I was impressed by the positive approach and realism underpinning the report and the work of the APPG and the Asylum Advocacy Group.  It is recognised that some applications are not credible, which need to be identified as well as genuine claims that are not being accepted and that Home Office staff have to make incredibly nuanced and difficult decisions.There is a clear desire to work closely with the Home Office to improve the support and training of their staff to improve the quality of decison-making. Bishop Angaelos, who also spoke at the CCJ event I attended on 27 May, was, as usual, forthright and well informed.

Prof Geoff Gilbert of the School of Law and Human Rights Centre at the University of Essex pointed out that persecution on religious grounds was often seen as an identifier for other characteristics and was easy to be over-looked. He reaffirmed the significance of the 1951 Convention on Refugees but that as there was no international refugee Court decisions were made on a country by country basis although jurisdictions did influence each other. He saw the development of the concept of "cumulative discrimination" over the next few years.

The parallels drawn with the experiences of LGBT asylum seekers was interesting and merits further exploration. The same issues with credibility seems to recur.

The report can be found at Freedom Declared website of the Group
Posted by Derek McAuley at 12:42 No comments: