Celebrating the Declaration of Religious Freedom and Tolerance

Unitarians and Free Christians in Great Britain and Ireland join our Hungarian co-religionists in celebrating the Declaration of Religious Freedom. 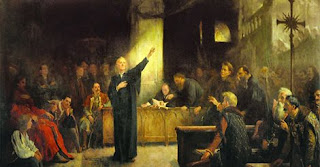 On January 13, 2017 the Hungarian Unitarian Church honours the 449th anniversary of the Declaration of Religious Freedom and Tolerance, an edict which might be considered as the first legal guarantee of religious freedom in the Christian Europe.

449 years ago, in 1568, on January the 13th, the Diet of Torda (Transylvania) proclaimed:
„His majesty, our Lord, in what manner he – together with his realm – legislated in the matter of religion at the previous Diets, in the same matter now, in this Diet, reaffirms that in every place the preachers shall preach and explain the Gospel each according to his understanding of it, and if the congregation like it, well. If not, no one shall compel them for their souls would not be satisfied, but they shall be permitted to keep a preacher whose teaching they approve. Therefore none of the superintendents or others shall abuse the preachers, no one shall be reviled for his religion by anyone, according to the previous statutes, and it is not permitted that anyone should threaten anyone else by imprisonment or by removal from his post for his teaching. For faith is the gift of God and this comes from hearing, which hearing is by the word of God.”

The Hungarian Unitarians are celebrating this special day with events in Torda and Kolozsvár. The celebrations start in the morning in the Unitarian church of Torda with a worship service led by rev. Márton Csécs, minister of the Torockó Unitarian congregation and an address delivered by Zoltán Balog, the Minister of Human Resources of the Hungarian Government. The service will be followed by a visit to the Museum in Torda, which hosts the famous painting by Aladár Körösfői-Kriesch, commemorating the event.

The celebrations will continue with an evening worship service in the 1st Unitarian church of Kolozsvár, with rev. Csaba Mezei, Unitarian minister of 2nd Congregation of Kolozsvár as preacher, followed by an address by Lajos Mile, the Consul General of Hungary. A concert featuring the Flauto Dolce quartet and the Choir of the János Zsigmond Unitarian College will enhance the festivities.

The day will be closed with a reception at the Unitarian headquarters.

In 2015, the General Assembly of the Hungarian Unitarian Church voted in unanimity to recommend to Unitarians and Unitarian Universalists around the world to join in the proclamation and celebration of January the 13th as Day of Religious Freedom.