The Suffragettes and Essex Hall


I went last weekend to see "Suffragette", Sarah Gavron's political costume drama set just before the First World War when the campaign for the women's suffrage developed into civil disobedience. 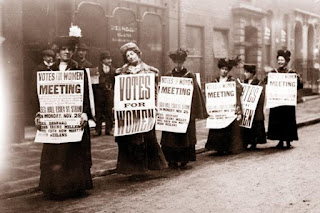 Essex Hall, the centre for British Unitarianism, played a part in the Suffragette campaign hosting many public meetings - look carefully at the photograph opposite. Located just across the road from the offices of the Women's Social and Political Union (WSPU) in Clements' Inn (now LSE), it was a convenient location and every Thursday evening public meetings were held either there or at Steinway Hall. Ticket prices ranged from 6d to 2s 6d but there was free admission on the night for women.

Essex Hall was the scene of the meeting on 10 September 1907 when Mrs Pankhurst explained that the WSPU was no longer to have a constitution resulting in many supporters leaving to form the Women's Freedom League. This more left-wing grouping was not only committed to democratic organisation but to furthering the cause of labour.

In December 1909 the mainly Anglican, Church League for Women's Suffrage, held its inaugural meeting at Essex Hall and in July 1912 it was the venue for the inaugural meeting of the Women Teachers Franchise League.

By 1912, as shown dramatically in the movie, the suffragettes had turned to smashing windows, cutting telegraph cables and placing bombs in pillar boxes and then even arson. Annie Kenny told a crowd at Essex Hall on 30 January 1913, with the Police present and taking an account of the meeting which is to be found in the Public Record Office:

"It is the duty of every suffragette and suffragist to go on attacking every pillar-box throughout the country and break every window without being caught".

Her speech at Essex Hall on 3 April 1913 resulted in her being arrested for incitement to riot.

The American newspaper "The Gazette  Times" on 1 May 1913 reported on a "Plot to Spirit Mrs Pankhurst from London" with a Miss Macauley (no relation) telling a packed meeting at Essex Hall, "From now on it will be war - real war". They highlighted:

"That the belligerent suffragettes are not daunted by the capture of their stronghold and the arrest of their leaders was evidenced by the attendance, which far exceeded the capacity of the hall. Hundreds of women, unable to squeeze in, remained outside the gates throughout meeting". I believe that the large hall at Essex Hall held 600 people, including in the gallery.

Rev Mortimer Rowe in "The Story of Essex Hall" (Lindsey Press, 1959) highlights that Essex Hall was a popular meeting-place, especially of progressive or left-wing movements, He mentions that the Fabian Society used it for their public and other meetings and describes a particularly rowdy prohibition meeting in the 1920s but  he soon moves to denominational affairs. Of the Suffragettes nothing...

Yet Unitarians had from the very beginning been supporters of women's suffrage. Alan Ruston in a review article in the Transactions of the Unitarian Historical Society (April 2002) has noted the involvement of at least 27 men and women with Unitarian connections listed in "The Women's Suffrage Movement: A reference Guide, 1866-1928". The Rev Robert Spears was present at the very first meeting on women's suffrage, he reported in The Inquirer on 19 June 1999.

A final piece of fascinating information. I was aware that the Bahai leader, Abdul Baha, has spoken at Essex Hall in 1913. Indeed two weeks ago a Bahai couple from Paris visited Essex Hall on a tour of various locations in central London with which he was associated. Infact, he lectured on "The Equality of Women" at a meeting sponsored by the Women's Freedom League, as was reported in "The Suffragette" periodical.